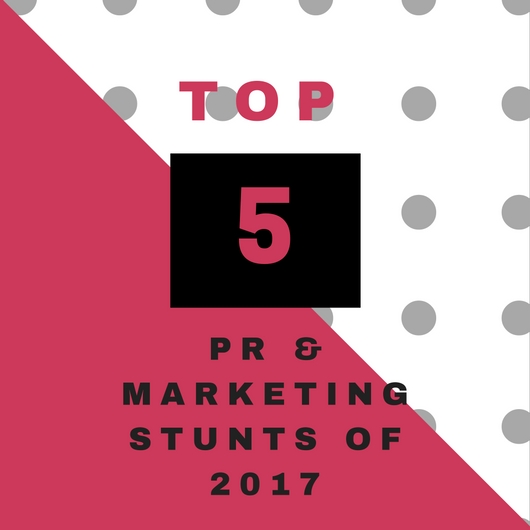 The new year always calls for a review of the standout moments in most fields. The field of  PR & Marketing is no different. We picked the top five stand-out pr and marketing stunts of 2017 that encouraged change, had us thinking or simply cracking up with its downright cheeky humour.

Of course, they can also encourage and inspire to think outside the box and to keep looking at current trends with a fresh perspective or see opportunities that we wouldn’t have had otherwise.

David Lloyds initiative to battle rising obesity with its ‘Run for your Bun campaign’ deserved a space amongst these top five. No cash or credit cards were required to pick and pay for your healthy lunch at its cafe, instead, punters literally rowed, jumped or ran for their meals.

The worlds of tech and sport collided when sportswear giant created the ultimate pop-up for runners. It was the first LED running track where you could race against yourself. From birdseye view, the track was shaped like a running shoe. Check out Nike’s LED running track:

Taking one of the most boring products and making it exciting, Proctor and Noble’s Mr. Clean managed to amass a grand total of 11,700 mentions across Facebook, Twitter, and Instagram in just one minute.
2.
In their “World’s Apart” campaign, Heineken put people from opposed political and social worldviews in a room together. They then had them work through their differences toward a common goal.
1.Hate him or loathe him but Pornhub managed to not only leverage the inauguration of Trump but made sure to stay relevant in the world of politics when its visitors to its site came across his speech. It went viral and gaining an influx of visitors.